Comparison with other heavy liquids

In the mineral industry, heavy liquids are commonly used in the laboratory to separate the “light” minerals such as quartz and clay from the “heavy” minerals. The density used for this type of separation is about 2.85 g/mL, nearly three times the density of water. Heavy liquid separations are carried out for varied reasons, depending on the industry. The mineral sands industry uses heavy liquid separations to check the grade of samples in their process, and to determine the efficiency of their industrial hydrocyclone separations. The diamond exploration industry uses heavy liquids to separate the dense indicator minerals from sand and clay.

Another use of heavy liquids is in paleontology. Typically, these heavy liquid separations are conducted at a lower density (e.g. 2.2 g/mL) since the separation is not between minerals of different types, but between fossil bones and minerals.

Another organic heavy liquid, used when higher densities are required, is methylene iodide. Methylene iodide has a density of 3.31 g/mL, a vapour pressure of 1.2 mm Hg at 25oC, and a low viscosity of 2.6 cP.

The three commonly used organic heavy liquids all have problems with toxicity, and must be handled in a fume hood. Methylene iodide is moderately toxic by subcutaneous and other routes. Bromoform has been shown to cause severe liver damage and is poisonous by ingestion. There is evidence that it is a human mutagen and a neoplastigen on experimental animals, so it is potentially carcinogenic. TBE is poisonous by inhalation or ingestion and is a moderate irritant to the skin. It is a neoplastigen and mutagen with animals.

These liquids have the problem of being volatile and potentially causing health problems. For this reason, they are being phased out in the USA.

Two low-toxicity substitutes for the organic heavy liquids bromoform and tetrabromoethane (TBE) have been available for some time. They are SPT (sodium polytungstate, or sodium metatungstate), and the lithium equivalent LMT which is lithium metatungstate. These are all inorganic compounds, based on the [H2W12O40]6- polyanion, which is dissolved in water to form very dense solutions.

In our experience, SPT (sodium polytungstate) and LMT (lithium metatungstate) are not used by many mineral labs which need a heavy liquid with a density of 2.8 g/mL or more, because their solutions at these densities are too viscous. Typically the viscosity of these liquids is greater than 25 cP, or more than 25 times the viscosity of water. The higher viscosity of heavy liquids prepared from sodium metatungstate (also known as sodium polytungstate, or SPT) can be seen in the graph to the right (Figure 1). In practice, the higher viscosity of SPT leads to significantly slower and less efficient separations, as well as slow filtration.

LST solids contain lithium heteropolytungstates in the form of extremely soluble, colourless hydrated crystals. Concentrated aqueous solutions of LST form colourless or pale yellow heavy liquids. LST Heavy Liquid is normally used with an aqueous base. However, the LST crystals are also highly soluble in acetone and alcohols, and can form dense liquids in these organic solvents. This provides a range of methods for the use and recycling of LST Heavy Liquid.

At 25oC LST Heavy Liquid can be used at any density up to 2.95 g/mL by diluting with water or by concentrating to remove water. The recommended operating density as a replacement for bromoform is 2.85 g/mL. At this density the viscosity is low, and the likelihood of crystallisation is reduced. Densities up to 3.6 g/mL can be achieved at higher temperatures. The maximum density of LST Heavy Liquid is given for a range of temperatures in Figure 2.

Low viscosity is a feature of LST Heavy Liquid. Grain separations in LST Heavy Liquid occur at about the same speed as when using TBE, but without the occupational hygiene risk of organohalides. The exact viscosity of the LST Heavy Liquid will vary with its temperature and density (see Figure 3), and is typically about 11 cP.

LST Heavy Liquid can be stored in closed plastic or glass containers. LST Heavy Liquid may cause corrosion of metals, so contact of LST with metals should be avoided during storage and heavy liquid separations.


Changes during Storage in Cold

If subject to very cold conditions, crystals may appear in LST Heavy Liquids. These will redissolve upon warming the heavy liquid for a few hours to 40oC, with occasional shaking or stirring.

LST Heavy Liquid is a solution of stable inorganic ions in water, and has virtually an indefinite shelf life. In extended trials, LST Heavy Liquid which has been stored for over 10 years shows no sign of decomposition.

LST Heavy Liquid was developed through an AMIRA research project. The driving force behind the development and introduction of LST Heavy Liquid was the need for a dense liquid to replace the undesirable dense organohalides such as tetrabromoethane (TBE) and bromoform. During the development of a suitable heavy liquid, safety was the prime consideration. Performance, i.e. high stability and low viscosity, was then optimised.

In 2000, Rio Tinto Exploration and Iluka Resources were awarded “Highly Commended” certificates in Australia’s National Safety and Health Innovation Awards for their part in supporting the use of LST Heavy Liquid to replace bromoform and TBE.

Tests indicate that LST Heavy Liquid is unlikely to be a significant skin irritant. However, waterproof gloves should be worn while using it. The crystalline solids from LST Heavy Liquid are considered an eye hazard because of their potential irritancy when allowed to remain in contact with the eyes, and eye protection is required when using LST Heavy Liquid.

LST Heavy Liquids do not present any hazards from volatile vapours and do not require expensive fume extraction systems. 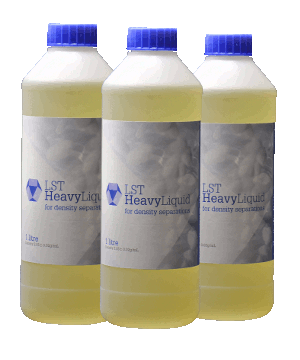 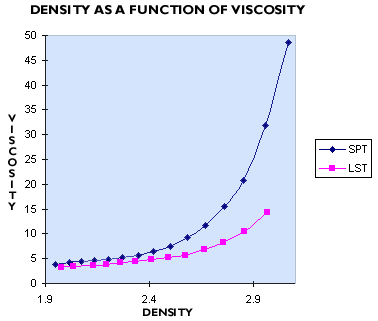 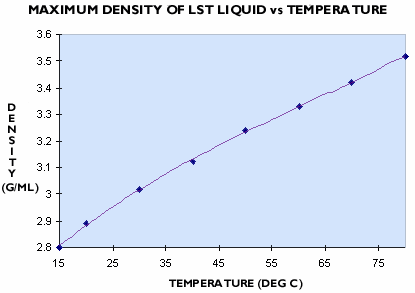 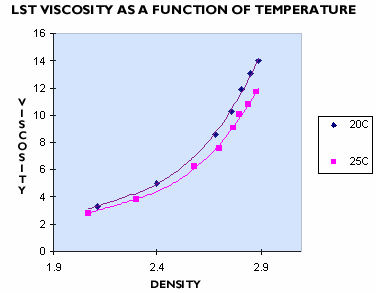